Tonight you got a call that you had prayed your whole life to never receive. You told God over and over again that you could not and would not have a child with special needs. You told Him you couldn’t handle it. You told Him it would hurt too much to watch your child struggle. You put your foot down. He could throw anything else your way, but your children were off limits.

But tonight, you got a phone call.

“Your daughter Evelyn has CHARGE syndrome.”

But it’s going to be okay.

It will be okay.

I’m not saying it won’t be hard. It will be. You will soon be doing things you never thought you were capable of doing. Things will happen that will give you nightmares and bring you to tears whenever you think about them. This is not an easy path you are starting on.

But it is a good one.

It is a good path.

Eventually you and Evie will get a chance to bond away from the hospital setting and you will feel your heart explode with love every time you look at her. Your heart will feel immense pain you never dreamed of, but also incredible joy you couldn’t know existed. The two of you, mother and daughter, will have a bond like soldiers that have returned from war.

You will experience a level of joy that is saved just for special needs parents. Her milestones will never get old. You will never just accept them as daily life. Instead, a year af 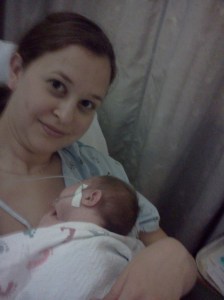 And you’ll look back at these early days and wish you hadn’t been so afraid, that you’d enjoyed Evie instead of analyzing her. That you’d realize so much quicker that THIS little girl in front of you is the child you carried for months. It feels like THAT child died and that you are left with a stranger, but she’s not a stranger. She’s the same little girl who insisted on dislocating your rib and wedging her head into your hip. She’s the same girl who kicked her sister in the head when she felt squished by her snuggling. She’s the same girl that you carefully chose names for and sang to and loved. THIS is Evie. Stop fighting that. See her and stop fighting who she is. She is YOURS.

And yes, she has CHARGE Syndrome. She does. She also has eyes that will eventually settle into hazel and hair that is the most gorgeous shade of strawberry blonde. She has an impeccable sense of comedic timing and facial expressions that will always bring a smile to everyone around her. And she has health issues. She’ll need a trach and a feeding tube for who knows how long. And eventually you won’t care and you’ll want to write love sonnets to those two devices that have kept her here with you. You’ll get there. You will.

You will get there. And you’ll be so grateful to have THIS little girl in your family.

I’ve been writing this little letter to my NICU self for a while. Adding thoughts here and there, forgetting about it, coming back to it. And ya know, I really do wish sometimes I could go back and do it again with what I know now. I think it’d be better.

But maybe it’d be harder? Because I know her now. I love her. I can’t breathe when I think of life without her. And those early days were a bit touch and go. The shock and the grieving and the denial and the fog and the confusion and the…separateness from Evie, it all insulated me. It wasn’t real.

I think this last year has been harder than that first one. Back then we were grieving the loss of an imaginary child and an imaginary life. This year, we were living in constant fear that we’d have to grieve the loss of a real child and a real life. Evie isn’t separate from us anymore. Our lives are wholly entwined. And there’s no confusion over medical terminology or the reality of the situation. It has become more familiar in routine, but not any less terrifying at times. Our eyes are open to how much we have to lose now. She’s not just a baby that people claim is ours, but we’re not so sure of ourselves. She is OUR daughter. She is a little ball of sunshine in our family and we know how dark it would be without her.

I always thought this day, Diagnosis Day, would forever be one of the worst days of my life, but it’s not anymore. I honestly had forgotten at first that it was even today. It was an incredibly hard day back then, but now it just seems so…small. So unimportant. She had CHARGE before they told us. It didn’t change her at all. Really, it changed things for the better. It made her team of doctors more proactive in making her safe, giving her a secure airway and a way to receive nutrition long term. It was a good day in that way and I wish it had come sooner. But I think that was the beginning of the new us. And so it doesn’t feel like it happened to us. It didn’t end our lives. It ended those other people’s lives. For us, it brought us to life. That’s where we began so the grief of those other people doesn’t touch us as keenly. I can remember it. I can even bring up the feelings, but it’s not as…hopeless. It was simply the end of the life we thought we’d have, the life we thought was best. Now we know better. That this life really is a good one, the best one for our family.

Happy Diagnosis Day then. The day we finally had a clearer path to give Evie what she needed and the day our new selves began.